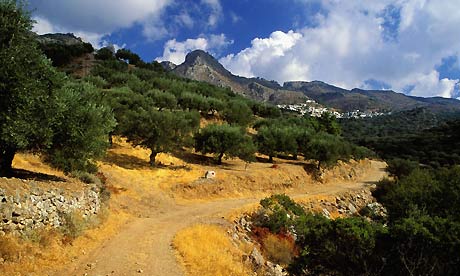 PRISM is the Program for Regional Investigations of Sustainability in Messenia. It is a multi-disciplinary program established for the study of cultural and resource sustainability in an area of Greece which is currently being developed for tourism. The program is based in Municipality 5 of Pylos-Nestoras in Messenia. A particularly beautiful region of Greece, extensive olive cultivation, small off-shore fisheries and fishing, animal husbandry, and tourism are the most visible industries here. Issues of the dwindling water supply, the fragile biodiversity, soil changes due to agricultural chemical use, introduced flora, and the influx of travelers all threaten the traditional lifeways of the local population through changes in the ecosystem. The natural landscape in Messenia has been modified over the ages by humans, driven by the necessity of livelihood and transportation. Agricultural and pastoral needs have altered the environments surrounding sedentary humans for millennia: mountains have been lined with stone built terraces, fields have been cultivated with rows of fruit-bearing trees and grains, and paths have been forged in even the most extreme landscapes.

The Divari Lagoon, famous for its unique habitat and biodiversity, is also found in this area. Over the decades, the lagoon has been threatened by the significant footprint from the use of agrochemicals, poor sewage and solid waste management, and noise pollution – all deterrents of avian migration and roosting in the area. Natural resources, particularly ground water, have been exploited to benefit inhabitants. In this ever-changing world, sustainable agricultural and ecotouristic methods must be implemented to allow Messenians to continue to thrive in the wake of global warming, increasing demands of the water supply, soil erosion, increasing CO2 in the seas, pollution of the air and water, and tourism. PRISM seeks to understand the recent environmental changes and trends, assess sustainability, project outcomes of current behaviours, and to provide recommendations on how to strike a balance between the demands on natural resources and the support of the local population. In recent years, the EU Nature and Biodiversity Commission has protected Divari Lagoon through the Natura 2000 program from the negative effects of human farming, settlement, and megaresort development. Education and ecofriendly developers have increased awareness about sustainable practices and responsible governance of common properties.

As founding director of PRISM, Dr. Ruscillo’s inspiration has been the investigation of the paleoenvironment changes observed through the study of faunal remains from the archaeological site of Iklaina. The site is situated in Messenia, Greece on a fertile plateau surrounded by steep cliffs and gorges. The alterations of the landscape due to changing cultural habitations of the site through the ages, ancient and modern building and road construction, and changes in the economic use of the land can be identified through the study of terrestrial molluscs and other faunal remains. Surface survey conducted between 1999-2005 covering 22 square miles around the site recovered significant amounts of slag and pottery indicating ancient industries consuming considerable amounts of wood to power kilns and furnaces. The excavation of part of the Mycenaean occupation of the site from 1,600-1,100 BCE has provided evidence of the deforestation of the area through the exploitation of local wood resources for building and fuel. This, along with hunting, also caused the local extinction of wild animal populations – the disappearance of the roe deer, red deer, bear, and wild boar is noted in the faunal record. These changes in the landscape may have contributed to the abandonment of the site around 1,100 BCE when there is evidence of the final destruction of the Late Mycenaean buildings. Although there are later ceramic remains from the Classical/Hellenstic and Byzantine periods, no habitation of the site can be recognized, perhaps because local resources had already been depleted. Records kept from the Ottoman period, combined with evidence from mollusc remains, reveal that the plateau was cultivated for wheat. With the expulsion of the Ottomans in the early 19th century, the economic strategy for the land changed to pastoral use and for the cultivation of olives.

The building of terraces along the topographic contours of the landscape in the past 1,000-500 years has affected soil erosion and soil composition. The irrigation of the terraces by natural means is no longer possible due to the desiccation of the local water supply on the plateau; olive trees are irrigated by water collected in cisterns brought to the fields via pipelines. But as the water table decreases at a slow annual rate, agriculture and even local habitation is threatened.

PRISM seeks to integrate the expertise of various environmental specialists into a comprehensive and holistic evaluation of the sustainability of the landscape in the region of Messenia. Applicable studies related to anthropology, hydrology, geology, geography, topography, sustainable architecture and food systems, botany, and zoology of past and present populations will help illuminate the future of human habitation, especially in light of the change in economic use of the land in Messenia to support tourism. Four megaresorts are scheduled to be built in Pylos-Nestoras over the next decade; can the landscape be modified well enough to support tens of thousands of tourists while allowing the landscape and its inhabitants to maintain their integrity?